Relive the 2018 HFL Div 2 A Grade Grand Final between Kersbrook and Ironbank, with a little help from our mates at Akaroy Films.

We’re excited to secure the services of Akaroy Films to shoot the 2018 Mortgage Choice Hills Football League Div 1 and Div 2 A Grade grand finals. Roy has been making films for years, and a sample of his work can be found at the akaroyfilms channel on YouTube.

The Div 2 A Grade Grand Final between Kersbrook and Ironbank will be available soon. In the meantime, Roy has shared a few highlights from the match.  If the footage looks a bit squished, go into full screen mode or click here to watch the video in a new tab.

Check out the hillsfooty.com Facebook page for more great footage. 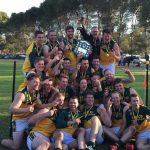 Well … the end of the 2018 HFL Division 2 A Grade season finished the same way it started: Ironbank playing against Kersbrook. However, a couple of things were different: the weather and the result.

The Dream Maker, along with a strong crowd of an estimated 2,500 or so fans, made its way to Callington Oval to see the final chapter in the 2018 HFL Division 2 season. Kersbrook had a strong and consistent season, being defeated only once in the minor round … by Ironbank in Round 10. The Thunderers also had a great year on the field, but they went into the Grand Final as underdogs against the apparently unstoppable Brookers.

From the get go, Ironbank had the ascendency, drawing first blood on the scoreboard. Whilst Kersbrook challenged Ironbank’s lead several times, the Thunderers held firm and eventually emerged victorious with a convincing 28 point margin.

Congratulations to Ironbank for breaking their 19 year premiership drought, Kersbrook for their classy performance throughout the whole of the 2018 season and Ironbank’s Elijah Ware for taking out the Peter Page Medal. We also must mention Marnie Bennett’s stirring rendition of Advance Australia Fair, as she helped set the tone for a superb day of local footy at its best.

As well as listening to the game, Roy from Hills Footy Flicks will be putting a video out soon. In the meantime, check out facebook.com/hillsfooty for live streamed footage of the dying minutes of this match, along with the medal presentation to a deserving Ironbank. Thanks to the HFL’s Facebook page for the pic. 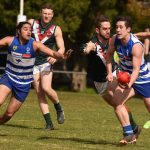 The 2017 Div 1 Premiers have been consistent performers all year, and it’s this consistency that’s held them in good stead. With fewer than two goals in the final scoreline, the Barker Roos bowed out of the 2018 comp after showing a lot of class this season, and with high hopes for 2019. Will Blackwood meet Hahndorf in the Grand Final? Only time will tell. Thanks to one of the Barker Roos’ excellent resident photographers (either Aussie or Dani, I’m not sure which – Colonel) for this action shot of two great teams in mid-flight.

Meanwhile, back at the Dream Maker … The Colonel turned his back for five minutes and the tech oven managed to somehow cook itself. Regrettably, none of the audio call is available. Video will be available soon, however it’ll be like one of those old-timey silent films. Watch this space. 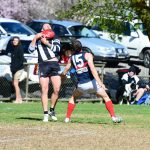 The punters expected a close game, and they weren’t disappointed. It wasn’t until the dying moments of the game when Hahndorf managed to take control and defeat the Demons by two goals. Could this be a Classic Quarter? Listen for yourself. Or, if you’d prefer, watch the game here.

Hahndorf has now locked in their position at the Div 1 Grand Final at Lobethal in two weeks time, and Uraidla is no doubt focused on putting their best foot forward for this weekend’s Div 1 Preliminary Final against Blackwood at Hahndorf Oval. Thanks to the Hahndorf Football Club for the pic. 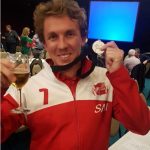 The 2018 HFL Mail Medal count was a big night … but it was especially big for this bloke: Mount Lofty’s Sam Miles.

Despite not having the best season, the Mount Lofty Devils produced the 2018 HFL Mail Medal Div 1 medallist in The Little Master. He lived up to his name by scooping up 26 votes overall, taking home the medal by a comfortable margin.

Sam was a little excitable when he received his medal; there’s a little bit of not-safe-for-work language during his acceptance speech. We’re not judging, but we are giving you the heads up in case you feel like listening to the count with kids present … especially if they happen to be the kids in Sam’s class!